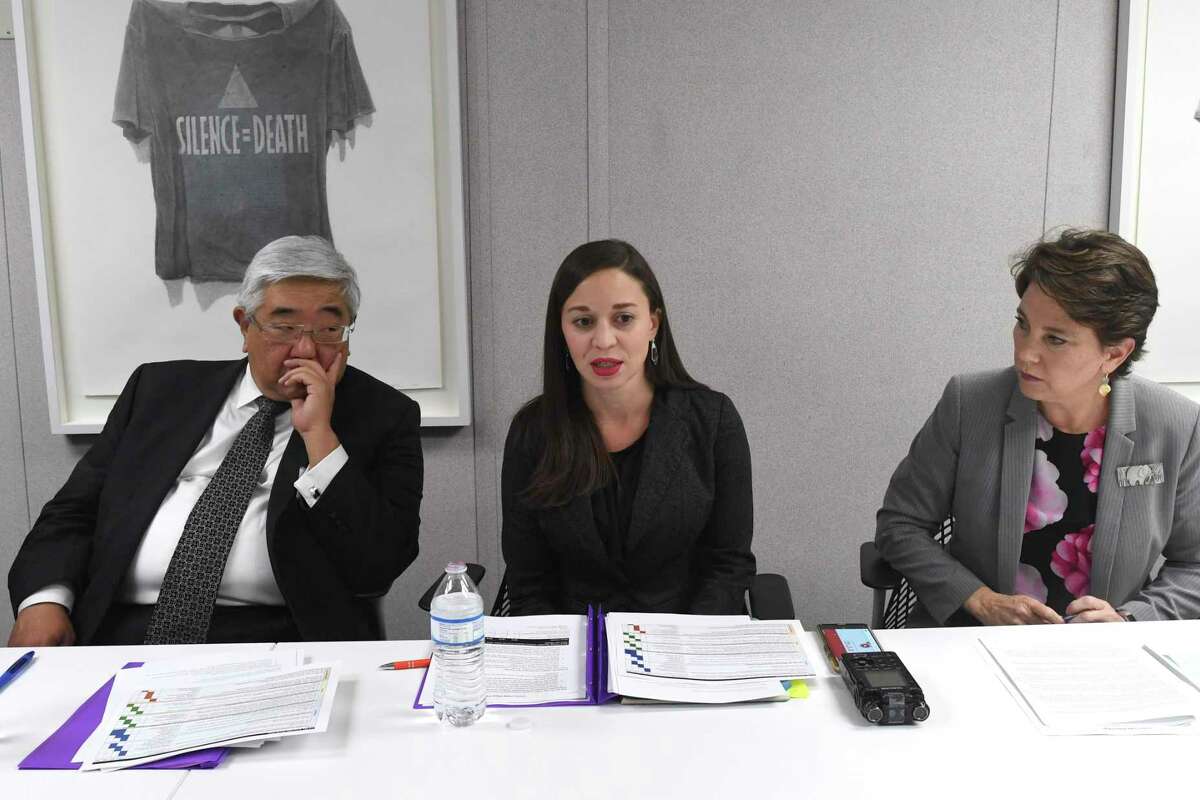 Domestic violence is so entrenched in San Antonio that officials pledged Wednesday to tackle the problem at every stage, from prevention services and media campaigns to anti-violence curricula in the schools and firearm surrender from offenders.

They unveiled a wide-ranging plan that over the next several years will try to fill gaps in the existing safety net, such as creating a crisis hotline, providing free legal help to survivors and training nurses to be experts in identifying signs of domestic violence.

An alarming trend in family violence fatalities sparked the creation of the plan.

At least 35 people died from domestic violence in Bexar County last year — killed by intimate partners, both current and former, or other members of their families or households, the city plan states. The San Antonio Express-News was able to confirm 29 of those homicides.

Since 2016, the number of women killed by intimate partners has doubled, even as overall homicides have decreased, the figures show.

The plan, which will be enacted over five years, approaches the scourge of family violence as a public health issue, officials said.

“This is looking at what we can all do as individual organizations to better address the needs of victims,” said Judge Peter Sakai, who created a city-county commission in July after several high-profile domestic violence fatalities drew public attention to the problem.

The plan, which was presented Wednesday to the City Council, was created using input from a host of sources, including victims, advocates, experts and several different sets of data.

From there, the Commission on Collaborative Strategies to Prevent, Combat and Respond to Domestic Violence, which Sakai formed in July, selected several tasks in the city plan to tackle in its first year. It, too, released its one-year work plan Wednesday in coordination with the city’s plan.

The commission looks to improve responses across the whole system — everything from better referral services for victims to more free legal services for protective orders to expanding violence-prevention curricula in the schools.

To address a dearth of child, youth and family prevention programs, the plan champions expanding access to Triple P Parenting, a “positive parenting” program that seeks to reduce the incidence of child abuse, a tap root of domestic violence.

The idea behind many of the proposed solutions is to cut off violence before it has a chance to flourish.

“What we recognized is that if we continue to deal with (domestic violence) after it happens, we’re going to continue to have the numbers going up,” said Assistant City Manager Colleen Bridger, co-chair of the commission. “We need to get out in front of this issue.”

City officials said they were saddened by the report’s findings but encouraged by the city’s broad, far-reaching approach.

“On the one hand, I’m excited and optimistic about our forward direction,” District 8 Councilman Manny Peláez said. “On the other hand, I’m broken-hearted that we’re just now having this conversation. And I’m thinking what else should we be tackling?”

They all underscored the importance of the issue.

“This isn’t an issue confined to one part of town or one ZIP code,” Mayor Ron Nirenberg said. “Domestic violence occurs all across town and in every population. The numbers are clearly going in the wrong direction. It’s crucial to help victims and perpetrators, make them whole again so they can become part of the community again.”

The idea for the city report arose in May after City Council members Shirley Gonzales and Manny Peláez suggested increasing funding and developing a comprehensive plan to address domestic violence in San Antonio.

Many of the advocates and victims expressed frustration that domestic violence has grown to become such a severe issue in San Antonio. Many felt it had been largely ignored.

“They were frustrated because the system hasn’t been responding,” Judge Sakai said. “They said, ‘Where have you been? It’s about time.’ Someone was finally listening.”

The city identified six overall goals it aims to accomplish in five years. Its main focus is on primary prevention, but it also addresses ways to improve the system today.

For example, the city suggested focusing on a way to better coordinate services among the many organizations and nonprofits that work with victims.

It also proposed developing special programs that target domestic violence among especially vulnerable populations, such as immigrants and LGBTQ people.

Some respondents suggested complaints about law enforcement should be directed to the City Council or a position in the mayor’s office, rather than the Police Department’s Internal Affairs Unit.

In response, the city proposed providing enhanced training for first responders, including those in health care, focused on sensitive, trauma-informed interviewing techniques.

Police Chief William McManus said officers have been trained in the past to be tough, not empathetic. He pointed to the well-known television series, “Dragnet,” which aired from the 1950s to 1970s. In it, the characters would frequently implore female informants to provide, “Just the facts, ma’am.”

“Police officers weren’t supposed to be compassionate,” McManus said. “They are supposed to enforce the law.”

McManus said the department has been on the forefront in trying to change that perception among police, and more generally, improve how officers respond to family violence.

For example, in 1995, the department hired civilian caseworkers to work with the Crisis Response Team, which responds to family violence calls, so that victims would feel more at ease.

More recently, the department required that all patrol officers, not just detectives in specialized units, get trained in victimology, or the study of the physical, emotional and financial harm people suffer because of crime.

“We’ve gone beyond that to try to reduce that insensitivity piece,” McManus said.

After city officials identified its recommendations, six subcommittees from the collaborative commission met three times to identify which tasks it wanted to focus on in its first year.

The subcommittees represented various stakeholders in the fight against family violence — prosecutors, judges, policymakers and leaders in the health care, law enforcement and nonprofit fields.

One task the commission chose to spotlight: Helping implement a communitywide media campaign called “Love Is ” that will address “cultural norms” that nurture domestic violence in San Antonio. The city unveiled the first part of that campaign earlier this month.

“We learned there is a lack of understanding of what domestic violence actually was,” Bridger said.

The commission plan also calls for the creation of a pilot high-risk team — police, prosecutors, shelter operators, advocates and others who intervene and serve the victims identified as being most at risk of being killed, and provide heightened accountability for the worst and chronic offenders.

In the past few years, 10 cities in Texas have formed high-risk teams, but not San Antonio.

“We don’t have to reinvent the wheel,” said Judge Monique Diaz, who co-chaired the commission. “We’re going to bring together the manpower and leaders and then look to and utilize (practices and policies) that have been successful elsewhere.”

The agenda also includes plans to increase housing for survivors, improve and standardize data collection across the span of agencies and services and standardize the use of so-called “lethality assessments,” which are used by law enforcement and service providers to identify the victims most at risk of homicide.

The city has put forward $1 million to fund some of the improvements — expanding access to the Triple P parenting program, school-based violence prevention and the media campaign.

Some local charitable foundations have kicked in more money for those endeavors, including $600,000 from the San Antonio Area Foundation for the parenting program.

“We hope this plan will provide more attention upstream before the police have to get involved on the victim side of it,” McManus said.

The city also has set aside an additional $500,000 to go to agencies or nonprofits that develop proposals to address the gaps.

Bridger said those recommendations can be approved by the City Council, or they can identify additional services to fund.

For example, some City Council members, including Peláez, have discussed allocating a portion of the $500,000 to fund a pilot program that would serve men and women accused of misdemeanor family violence who have a history of substance abuse.

They said they will continually seek input from the community by hosting quarterly meetings, regular Facebook live discussions and distributing engagement surveys. The first quarterly meeting will be Nov. 18 from 6 to 7:30 p.m. at the Bazan Library on the near West Side.

Sakai, Bridger and Diaz acknowledged there have been a number of collaborative initiatives in the past aimed at combating family violence. For example, when the Family Justice Center opened in 2005, it was heralded by advocates because all services were housed under one roof.

However, the group said this effort is different because the officials have identified concrete tasks to complete and ways to evaluate success.

Bridger said both the city and commission will closely track what is accomplished in its first year. From there, both groups will adjust their approach, as needed.

“A year from now we will update the city on our results and talk about the plan for year two,” she said. “This is not just a pretty plan we’re going to unveil and then never refer to again. We’re holding ourselves accountable.”

This story originally appeared in the San Antonio Express News.