San Antonio Express News: Instead of ‘all rise,’ it’s clicks on the phone that signal court is in session 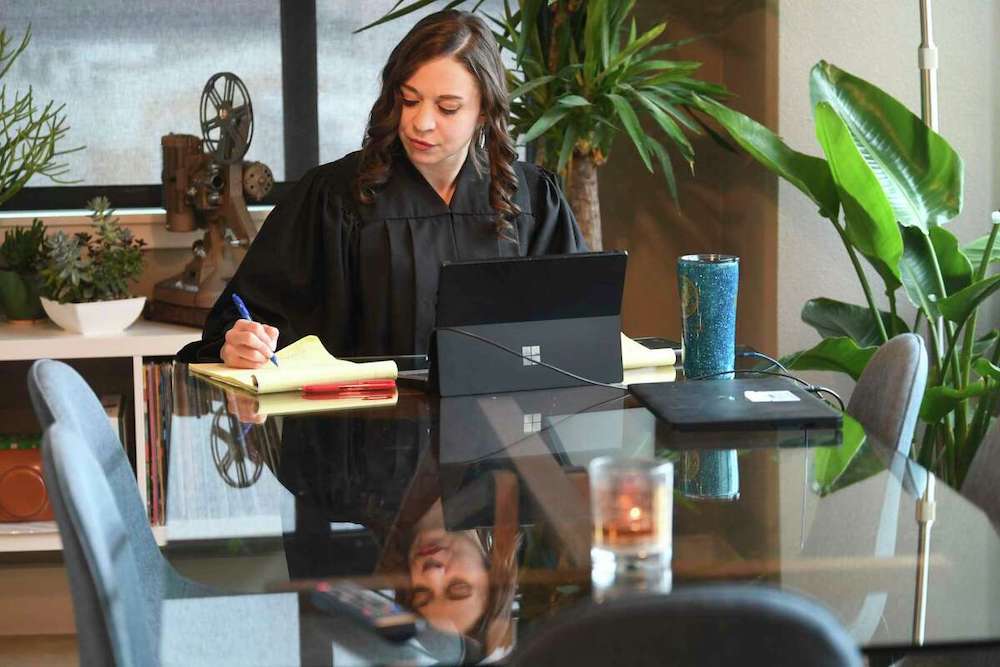 These days, a series of clicking sounds on the phone have replaced the “all rise” that a bailiff traditionally utters to start courtroom proceedings.

Although the courthouse is still open, work-from-home rules are in effect. So laptops, phones, call-in numbers and passcodes is how attorneys and their clients now talk to a judge.

The clicks are quickly followed by a roll call to identify everyone on the line. If it’s a video conference, their faces show up like a checkerboard on a computer screen.

The coronavirus outbreak has mostly shuttered the doors of the Bexar County Courthouse, the Cadena-Reeves Justice Center and the Paul Elizondo Tower, the buildings that make up Bexar County’s justice complex downtown.

On Monday, Bexar County’s civil District Courts began hearing all cases remotely, using either audio or video. Priority is given to essential matters such as those involving protective orders and children’s issues.

“I know this is a dire time. We are all in a moment of crisis,” Judge Monique Diaz said recently between online Zoom hearings and mock trials.

Diaz, presiding judge of the 150th Civil District Court, spent last week trying out the new format remotely from her residence. Some judges conduct the remote hearings from the courthouse, but the bulk of the judges have been working from home.

“I try to see the positives in it,” Diaz said. “One is we hopefully will close the technology-digital divide, and the other, that we start using technology to advance all of our interests. It is rewarding to see we can take advantage of technology so court proceedings don’t cease.”

Since early March, all judicial proceedings — from justices of the peace, municipal court, criminal, civil, misdemeanor and children’s court — have mostly been conducted remotely, either on the phone or through video, as court officials attempt to keep justice on schedule.

“It’s pretty remarkable. We’ve seen stuff like Zoom, video setups in the jail, so we can conduct hearings while literally sitting at home,” said Judge John Longoria, presiding judge of County Court-at-Law No. 5 and administrative judge for the county courts.

He admitted he “is older” and needs some help with technology, but he embraces it as an opportunity to continue working.

For some, like County Court-at-Law No. 13 Judge Rosie Speedlin Gonzalez, using Zoom or other video hosting sites for remote meetings is nothing new. She spent years as an attorney handling Child Protective Services cases in Children’s Court, where officials began doing videoconferencing in 2005. Last week, she lent a hand with some confidential CPS cases via telephone.

“Necessity has been the mother of unused technology,” Speedlin Gonzalez said via text last week regarding the need to use audio and video.

Children’s Court Associate Judge Richard Garcia has been conducting the court’s business by phone from his house. On Friday, he officiated over an audio adoption hearing. The coos of a baby could be heard in the background.

“This child is yours as if she was born to you, and you cannot return her to this court,” Garcia said to laughter from the new parents and a handful of court officials on the telephone line.

Garcia said adoptions “are the best part of my job, because it’s a happy ending and new beginning.” But he lamented that his jokes about getting to rename the child and that she will need to live with them until she is 37 years old fell a little flat on the phone.

“I usually do this to see their reaction,” he said. “It’s a glorious occasion.”

For others, the rapid-fire changes happening at the courthouse right now are “revolutionary and will force us to use technology,” said Judge Ron Rangel, presiding judge of the 379th state District Court and administrative judge for the criminal courts.

“This is a special circumstance that will cause a lot of structural change,” said Rangel, who has been going to the courthouse every day and has asked people entering his court to wear masks for protection. “It is terrible we have to go through this. Hopefully we can usher in something that is better. It is forcing us to confront technology.”

Rangel implemented a presiding judge system last week so that only one criminal judge — on a rotation — hears a small docket of five cases at a time for a maximum of 25 cases per day. He said the action helps people adhere to social distancing guidelines while making sure the defendants have their day in court.

In Children’s Court, court managers said that once they coordinate with attorneys, parents, ad litems, prosecutors, interpreters and case managers, and once the paperwork is gathered for all to review remotely, the process runs smoothly.

“Our hearings have been more on time and on point,” said Becky Snodgrass, a Children’s Court manager, who added that there can be up to seven people on either a phone call or a Zoom hearing.

Her colleague, Sara Reilly, also a Children’s Court manager, said she has found that during the stay-home rule, there has been strong parental participation.

“They don’t have to travel to Children’s Court, find parking,” Reilly said, noting that even though some of them may lose their parental rights, they are still heavily participating in the CPS hearings.

Each of the women touted cooperation with court staff that led them to conduct hearings in March that reunited about 50 children with their parents. About 50 adoptions were conducted. There is no backlog, Snodgrass said.

The only thing the women lamented during the video or phone process is that they can’t celebrate adoptions in person.

“We still clap for them on the phone,” Reilly said.